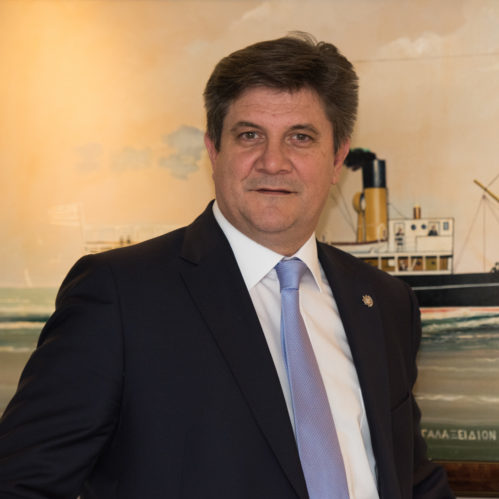 Mr. George Xiradakis was born in Athens in 1964 and grew up in Volos. He graduated from the Aspropyrgos School of Merchant Marine and after a five-year assignment on Greek ships as a Merchant Marine Officer, he continued his studies in Great Britain by obtaining a Diploma in Commercial Operations from City of London Polytechnic and MSc in Maritime Studies from the University of Wales. He served as Senior Manager in the French bank Credit Lyonnais both in Athens and Paris. In 1999 he founded XRTC Business Consultants, which acts as a commercial representative of foreign banks (Credit Lyonnais, Natexis Banque Populaires, Natixis) and institutions in Greek Shipping Market. Since 2010 XRTC has been an advisor of China Development Bank, while Mr. Xiradakis has been appointed as a member of the Bank’s specialized advisory board.

Mr. Xiradakis is President of the International Propeller Club of the United States – International Port of Piraeus, Vice President of the Hellenic Chinese Chamber, General Secretary of the Association of Banking and Financial Executives of Hellenic Shipping, Vice-President of the Greek-Chinese Association, member of the Mediterranean Committee of the China Classification Society (CCS), member of HELMEPA, Piraeus Shipping Club etc. He is also a BoD member of Paragon Shipping Inc. (NASDAQ: PRGN). In May 2019 he participated in the European elections as a candidate for MEPs.